There is a lot of info on the web about how to do two big things with electronic devices for astronomy. The first is usually about “electronically assisted astronomy”. Local astronomer Jim Thompson was interviewed for the website AstronomyConnect.com and he defined EAA the following way:

…the application of any sort of technological aid for the enhancement of astronomical viewing falls under the EAA umbrella. Devices such as light intensifiers and video cameras both fit into this category. The purpose of the technological aid is either to increase the observable detail over what’s possible with a conventional eyepiece, or in some cases to make it possible for those with vision problems to see anything at all.

In short, it helps you or your equipment see better. Tightly tied to it is the idea of using the electronic devices to actually capture the images for astrophotography.

Some people like to use their smartphones with their astronomy setup, but not always in those first two big ways. More often than not, they are using smartphones or tablets as simple electronic star maps or reference libraries rather than carrying paper guidebooks. My interests start off with these much simpler needs and go up to and include simple astrophotography. Let’s call the broader range simply Smartphone Astronomy.

The immediate challenge from old school astronomers is that of course using a smartphone will destroy your night vision. But will it? Does it have to?

The short answer is yes, if you are talking about simple possibilities. Just the same as anyone using a laptop could theoretically destroy their night vision, or even a flashlight. Except we all know that both those devices have a similar and simple solution to stop them from bathing you in white light — wrap them in a red plastic filter, and your problem is solved.

But what are the options for smartphones?

Options 1-3 — The most common solutions

If you are going to use your phone or tablet, you generally have five options to reduce the white light that the screen gives off. The three most common solutions are listed below but they all have trade-offs or limited functionality.

First and foremost, one of the easiest solutions of all is simply to turn down the brightness on your phone or tablet. Some have simple brightness sliders that go from glaringly bright to let you use it in the daytime under a bright sun all the way down to barely visible. Note this doesn’t BLOCK the white light, it just lowers it considerably. On an iPhone, you can find it in the pull-down settings (the slider with the picture of the sun on it).

Other phones and tablets have similar settings. While an unaltered smart device is usually still too bright for astro purposes, even on the barest settings in the dark, a reduction in output can be used in conjunction with the other options below.

The second solution will be very familiar, as I already mentioned it above. You can do the same thing as you do with laptops or flashlights and use a red plastic filter over the screen. Hobby stores often sell red transparent plastic in varying thicknesses, and you can cut it to fit the size of your screen. Some people go a step further and wrap a small elastic around the device to ensure it doesn’t slip during use. While it can be effective in blocking white light, I am not a big fan of this solution. The same plastic not only blocks the white light, it also reduces the sensitivity of the screen. If the red filter is too thick, you’ll be pressing on the screen, and your finger won’t register. If the red filter is too thin, you’re not getting enough of a filter.

The third most obvious solution is a “night mode” setting in the various astronomy apps themselves. For non-astronomy apps, the term “night mode” often is simply about creating greater contrast on the screen, not truly an astronomy-related night mode and often does little to reduce ambient light. However, not even being an astronomy app guarantees it has a night mode either. But many do and it will usually change your screen from blue and white on a black background to red lines on a black background.

For example, if you use the astronomy app Star Walk 2 on an iOS device, the main viewing screen when you open it might look like this:

But if you choose Settings and Night Mode:

While that seems to solve your problem, as I said, not every app has that setting, even if it is an astronomy app. Equally, when you first turn your phone or tablet on, it will most likely be on the home screen, not even running that app. So your main screen can blind you. Or, if you’re in the middle of a viewing session, and one of your notifications pops up on the screen, say a text from your spouse wondering when you’ll be home or an alert from an astronomy app that the International Space Station will be transiting shortly, those notifications come from the phone or tablet’s operating system. They are not part of the app, so its night mode doesn’t apply. Instead, the popups will be bright, and they will be glaring.

So we know turning down the light isn’t enough, the plastic filter isn’t perfect, and night modes don’t apply universally. What solutions are left?

In addition to my iPhone, I also have an older Samsung Galaxy S2 9.7″ Android tablet. It’s a nice big screen if I want to see what’s in the sky tonight, or even look at a detailed map of the moon to identify what craters I’m looking at in the EP. But if I’m using it, I don’t want it to light up with notifications (some of which are “persistent” or hard to turn off completely on some devices) nor do I want to be blinded with my bright homescreen every time I turn it on.

Instead, I run an app called simply “Color Screen Filter”. It has some basic “filter” colours to choose from, I selected red, and it let me put a shortcut on my screen. You can see it in the image below (top right corner of the image). This is what my screen looks like without the app running. 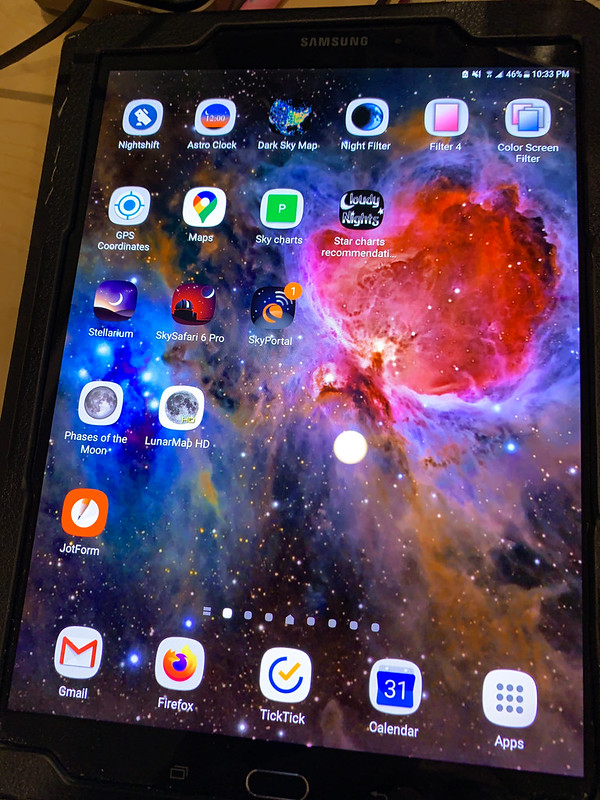 If I tap the shortcut, Color Screen Filter activates with a red filter and looks like the screen on the right. For EVERY app. For the homescreen. For notifications. EVERYTHING is filtered. (Note: Don’t worry, the bright white spot is reflection off my ceiling light, not on the tablet itself). 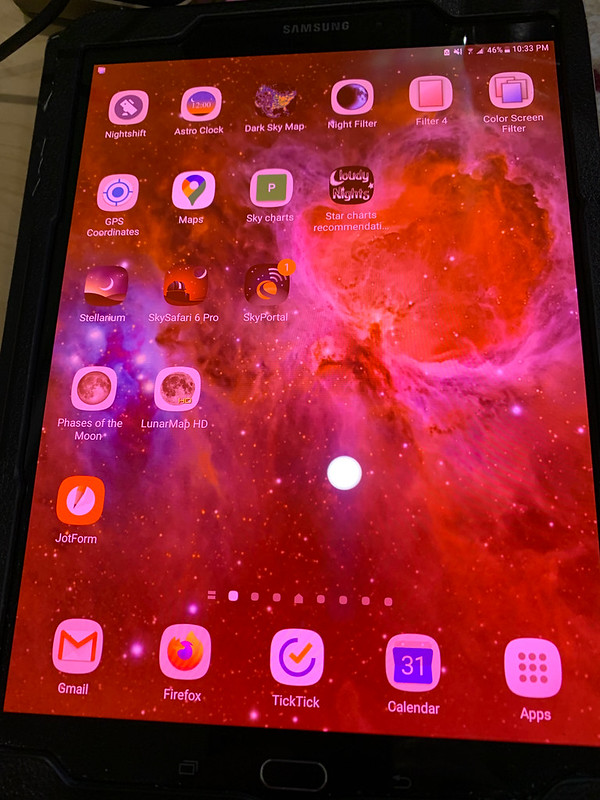 If I want to turn off the filter, I just tap the shortcut again. Unfortunately, I do need to remember to run the app before it gets dark so that I don’t have to turn the tablet on and go hunting for it. I usually turn down the brightness too (as noted above).

iOS devices have similar apps, and there are other Android ones. Search for “astronomy filter” and you’ll likely find it, as the makers often list it under astronomy too, or more generically under “screen filter”. There are other uses for screen filters, particularly for the other colours, but I found it easily enough. There were others available, but I like this one because it puts a shortcut right on the screen AND it’s free. Gordon Gecko may have told us that “greed is good”, but free is even better. And for those with older devices, most of the various apps are backward compatible since they’re not that sophisticated.

Newer devices can do it without an app. They just don’t flag it as a tool for astronomy. Instead, they list it under “Accessibility” as colour filters can help those with vision issues better read text even on websites or apps that weren’t originally designed to be vision-accessible.

Every device is a little bit different for the menus, but on an iOS device like my iPhone XS Max, the settings are shown below. Tap on Settings, Accessibility, Audio/Visual, Display and Text Size. You can then set a Color Filter (a color tint of red in this case) and Reduce White Point (which also limits the intensity of the light, similar to dimming the overall screen).

With the colour filter set and the reduced white point turned on, it takes my screen from the image below to the next image below that one. Even the notification of a Facebook message from a friend is filtered. 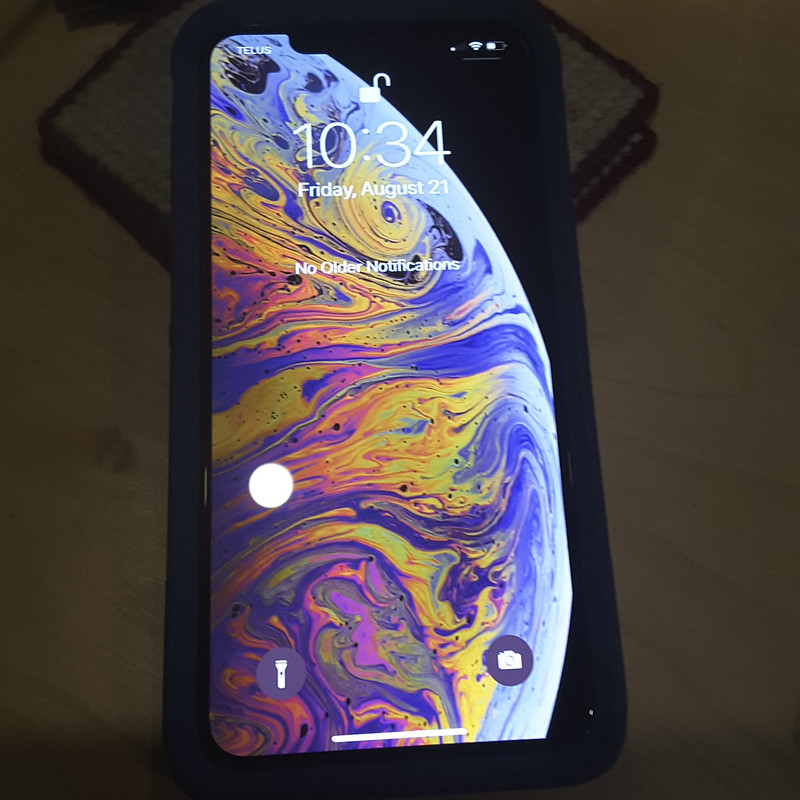 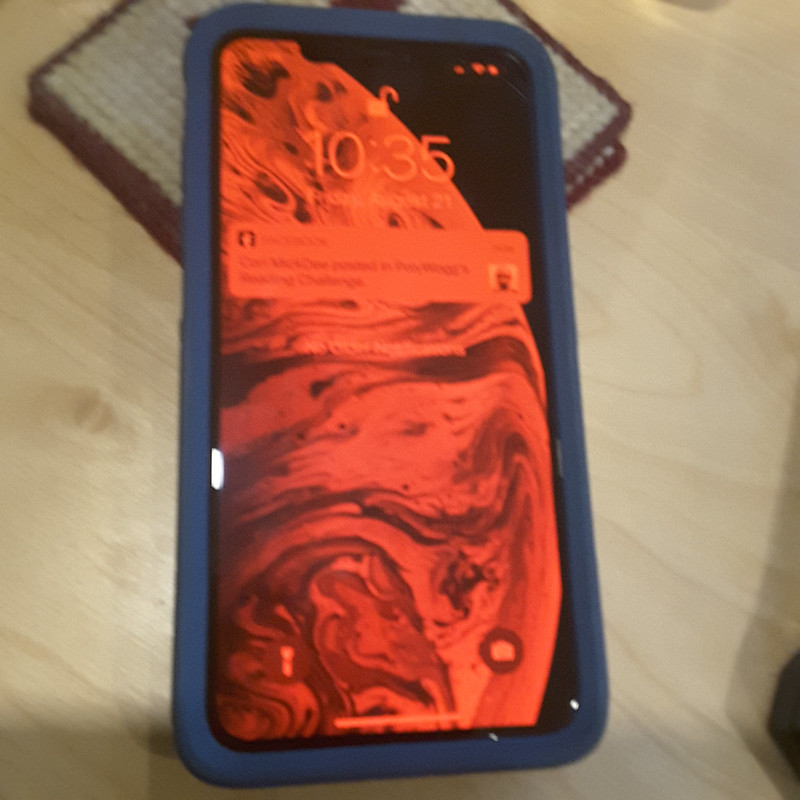 At first, this may not seem like a great solution. After all, instead of tapping a single icon or shortcut, I had to go through 4 menus to set the filter, right?

Not exactly. I have to do that ONCE, but as with the app, I can create an Accessibility Shortcut in the Accessibility settings. As you can see from the picture on the left below, it is letting me choose WHICH accessibility options I want on my shortcut, in ten different areas (for my iPhone). I’ve selected the two ones I already set above, color filters and reducing white point. It seems similar to the app so far.

But here’s the REALLY cool part. Because it is part of the operating system, and because people who need the accessibility settings often BEFORE they start using the screen, the shortcut is activated without first having to open the phone’s menus. You simply do a triple click of the power button (not that fast or slow, just normal), and up pops the accessibility choices I already selected earlier to be my defaults. Namely colour filters and reducing white point. With a single tap, my red filter is activated; another tap gives me my white point dimmed.

No app required, and the shortcut isn’t even on the homescreen, I can get to it with a click of an external button before I even unlock the phone.

Smartphones and tablets can be great tools to use while doing astronomy, but you need to be able to block their white light through one or more of the five common methods:

One last point for those wondering if the red filters affect your camera imaging or screen captures. For your camera, no, none of them alter your input. You can have a red screen that you see, but your camera just “sees” normally. Equally, for screen captures, most of them will have NO effect on screen captures (it doesn’t really “see” it, just you) except night mode. As you saw above, the night mode in Star Walk 2 *did* alter what you could capture.

So if you were thinking of using your phone and were worried about your night vision, worry no more. You have a solution (or 5!) for that.