Saturday, April 21 was International Astronomy Day, and while I held out a bit of hope I would make it to one of the daytime / solar star parties in Gloucester, I didn’t actually get going until after supper, just in time to head to the Canadian Aviation and Space Museum where RASC Ottawa was hosting a night-time star party. Not quite the big setup of our monthly summer parties in Carp, but still a decent number of people. In addition, my friend Rennie was going with his family to get used to setting up his scope. He has the same scope as mine, and we’re hoping he can jumpstart his learning and success curve a bit by piggy-backing off my now working alignment process.

As the first time of the season, I have to admit, I was pretty slow setting up. It was like I’d forgotten how ANYTHING attached to ANYTHING else. Surprisingly, I hadn’t forgotten any parts. I keep forgetting to make myself a bullet-proof checklist that I can double-check before leaving to make sure I have the main things (eyepieces, tube, mount, chair, and battery) as well as the extras (filters, bug spray — thankfully not yet!, etc.). Most importantly, I remembered a key astronomy tool — warm footwear.

It is incredible how fast cement can suck the heat right out of your shoes or light boots. I wore my full winter boots, and after 3 hours, my feet were done. But the three hours went well. I helped Rennie align his TelRad (the raw star finder to get you in the vicinity of stuff, like a spotting scope) and then we used Stellarium to help us find a good star to start with for our alignment. We saw Venus (white blob) and Venus slightly filtered (dull white blob), and of course the Moon. There were some public members and when they found out I was the Star Party Coordinator, I got a lot of questions. Rennie’s family and friends included a bunch of little ones, and they were tuckered out and cold before too long.

I stuck around until about 11:00, mostly just long enough for two things. First, I wanted to see Jupiter and it wasn’t yet above the trees. Second, I wanted to try out my new-to-me filter wheel. Essentially you put four or five filters in it (actually usually four, leaving the fifth one empty to have an “unfiltered” view), and then you can simply rotate the dial to switch filters easily. I took four that were great for Venus — but by the time I got around to breaking them out, seeing how it all worked, Venus was long gone. I tried them on Jupiter just to see, and one was just okay, but that was more about the angle than anything else. I also tried them on the moon, and one I quite liked just because it took the glare off. But there are separate ones for that type of reduced brightness, and I hadn’t planned on trying those, so hadn’t set up for it.

Most people were gone or packing up by the time I left, but it was one cold night.

Which of course meant Rennie and I had to try again on Sunday night at the Fred Lossing Observatory! Rennie got there before me, and he and his friend Philip had set up the big scope (there’s an 18″ scope there you can use, if you get trained and pay a fee). I just wanted to observe through my scope. It’s a bit of a hike out there, and I need to wrap my head around going more regularly. Nice dark skies, way better than anything I have access to closer. And there’s a warming room and portable toilet if needed. Still, it’s a 45-minute drive. Here’s a look at the warming room on the left and observatory with a roll-off roof, followed by a shot of the setup of the big scope (photos compliments of Rennie). 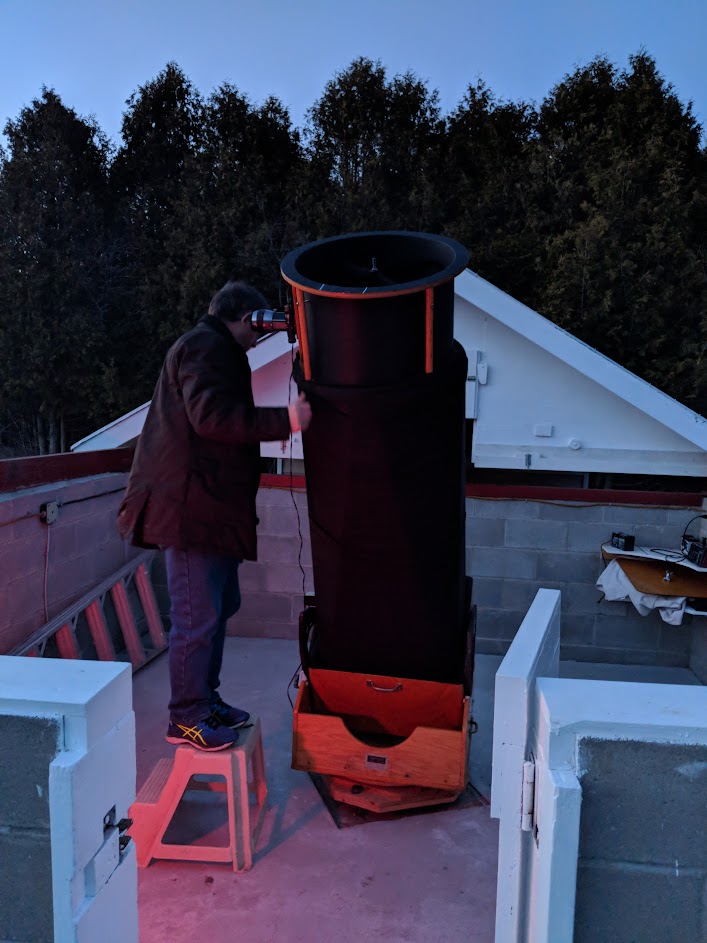 When I arrived, Venus was about to disappear behind some trees, but I really wanted to try my filter wheel. There was a nip in the air, and I thought about just observing with Rennie and Philip for a bit and not setting up, but I mean, really, I’d driven all that way, right?

But with Venus about 2 minutes from disappearing, I wouldn’t get set up in time. No problem, Rennie’s scope is IDENTICAL to mine, more or less. So I took my eyepiece and my filter wheel, and with Rennie’s permission, I tried out the colour filters on Venus in his scope. According to the more informed people online, the best filters to try on Venus are 25 Red, 38A Dark Blue, 47 Violet, and, to a lesser extent, 12 Yellow. I tried all four. Yellow and red were interesting, but I wouldn’t say I saw much more than slightly less bright white. The Dark Blue and Violet just changed the colour to weird (particularly the blue), and I felt I was losing detail, not gaining it. But, again, it was about to disappear behind the trees so I didn’t have a lot of time — in fact, after Rennie and Philip looked, Venus was gone.

I managed to get set up after that and I was reasonably happy with my new cases for accessories. I did a new case and layout for my eyepieces and filters, and the two turned out okay. Not perfect, but way better than I initially hoped.

I even have a bit of room to expand, which is handy. Of course, now that I’ve seen Rennie’s setup for his actual scope stuff, I’m thinking more ambitiously for that too! 🙂 I’m going to check out Home Depot this weekend for some suitable cases to use. But I digress.

I used Stellarium again, aligning on Betelgeuse and Arcturus. I totally forgot that I have a “recommended list” for my scope and that April’s are Procyon and Regulus. But the other two worked fine. I hadn’t really planned out my observing, mainly just wanted more practice getting set up, aligned, and observing.

Now, one of the nice parts of having a “go-to” computerized scope is that you can also do a Sky Tour as part of the setup. It basically has a database of 40K+ objects in the sky, and based on what you enter as your coordinates and alignment stars, time of day, date, etc., it knows what are the best things to see in the sky at that time. I’ve done sky tours in the past when I didn’t have good alignment and most of the time I didn’t “see” anything in the eyepiece. It just wasn’t aligned well enough, so when I went to look and bearing in mind I didn’t know exactly what I was supposed to see since I hadn’t seen it before, I didn’t have a lot of success.

Tonight, by contrast, was relatively awesome. Most good amateur astronomers would NOT do what I did … I looked at probably 75 objects in about two hours. When you include slew time, that equates to about a minute an object. Sometimes less. Plus I was occasionally taking notes on a white screen phone, totally destroying my night vision repeatedly. But perfection wasn’t the goal, I just wanted to see if my alignment let me see stuff worth seeing. And I confess, in part, to note some of those things so that when I’m at a star party or out with my family, I can say, “Hey, let’s look at M82, the Cigar Galaxy, it’s kind of cool.” Right now, I feel I’m almost looking at things randomly based on other people’s recommendations, I rarely have a set plan. I know what I need to do, but just haven’t gotten to that point yet. Tonight I wanted to see Venus and Jupiter, and I toyed with the idea of some photos of the moon on my smartphone, but instead, I decided to concentrate on the pre-programmed Star Tour.

Some highlights (with the full inventory at the bottom):

Overall, I saw 23 Messier objects, however briefly, and made up the list of 11 top highlights to see again. Preferably in not so rushed a fashion.

By this time, Jupiter was just edging over and peeking through the trees, but we were all pretty cold, so I decided to hang out in the warming room for ten minutes. I was relatively okay for warmth outside with layers, but even my boots were hitting their limits at the three-hour mark. But back out we went and saw Jupiter and the moon. By then, it was time for me to pack it in. As happy as I was with everything, I was cold, tired, and it was a school night, as they say. Plus I still had to drive 45 minutes back home. Fortunately, I park in a garage, so when I got home, I could just crash and leave everything in the car overnight. Definitely looking forward to some warmer weather.

Philip and Rennie stuck around a bit more, still experimenting with a laptop connected to his scope and some astrophotography with the big scope. They managed to capture the following shots of the moon and Jupiter, which was pretty reflective of what I saw before I bailed. 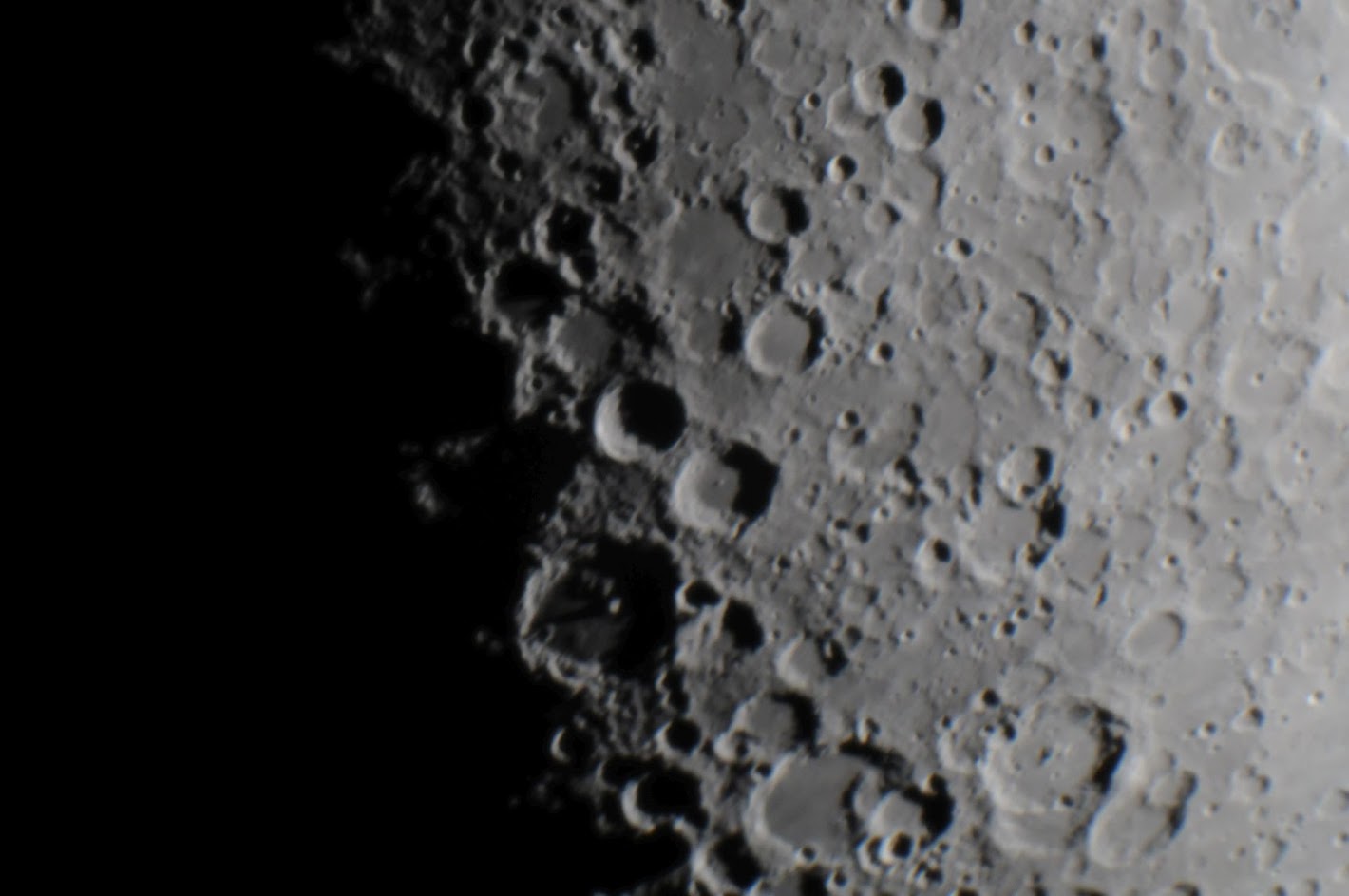 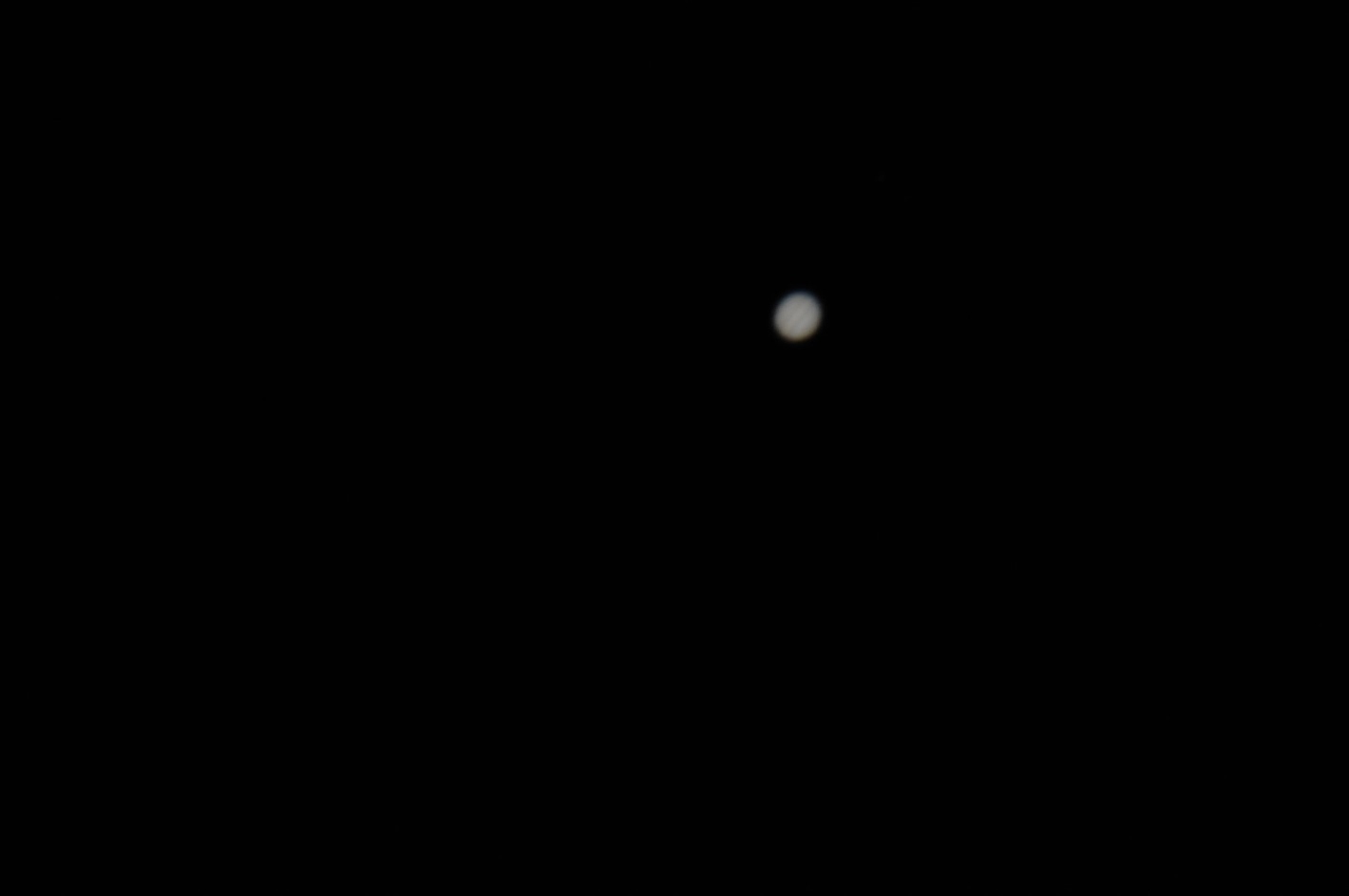 We’ll take it as a first night (or second night) out with the scope for the season. Rennie wants to play with some AP in future outings (using my smartphone attachment or my webcam, or both), and I want to nail down a list of good objects to view and at which magnitude. Plus keep playing a bit with my filters.

The full list of my observations for the night is below, but until next time,