Usually, I am out of the astronomy business from sometime in October to sometime in May. Last year, I did both April at the start of the year (Kicking off my 2018 astronomy season with two outings) and November for local RASC events, partly as I’m the Star Party Coordinator and I try to show up for all the events. But I didn’t accomplish much last year overall, and April and November were pretty cold.

But I have astro issues, so to speak. It’s practically a saga unto itself:

If you read all those, you would see me struggling with alignment problems, and finally — FINALLY!!! — getting a decent alignment with a very careful alignment process. And yet, to be frank, even with that “solved”, there have been lots of star party nights where I just can’t seem to follow my own instructions perfectly and I’m back in the world of a bit of hit or miss. Some alignments are good, and I can find some stuff; other nights, I still feel like I’m off on something. Usually, because I’m rushing to set up, people are milling around wanting to look, and I start to feel self-conscious that after six years, I am still not really sure what I’m doing. Could I improve that for this year? Perhaps if I take stock of last year, I might have a better base, I said hopefully.

An AstroLog with pictures

One thing people say to do is to keep a log. Then you can document your progress, keep track of the things you saw and what you liked about them, and slowly build your capacity. I even went down a rabbit hole to create my own logbook (Draft Astronomy Observing Log). And I thought that if I could take a picture of what I was seeing, I could use it as blogging fodder to maintain my interest and momentum. For example, I could take a picture of the moon and show the Sea of Tranquility and where it is on the moon’s surface, noting some things about it that I could remember the next time I was moongazing. Not Astrophotograph of the Day (APOD) quality, more like a souvenir shot. I don’t have the right mount for serious AP, but I know a couple of people who have used my same setup to get some great shots with just an iPhone and an adapter. So I wanted to try it. I used a Meade adapter that I already had, and my wife’s iPhone 6. It had some promise, although a bit basic, and it was my wife’s phone with limited memory and the basic camera app, so not a long term solution, just a test.

I got a pic of the moon — it’s not horrible, but I’ve taken way better before.

I tried for Jupiter and got a few shots, although again, not my best.

Nevertheless, there was SOMETHING there, which was encouraging. Not great, but not the worst I have done either. So I upped my ante and went for the REAL challenge — a bright Messier object, like a globular cluster. I got a faint fuzzy to start.

Then in June I doubled down and bought a new adapter, the Celestron NexYZ. It’s the Cadillac of smartphone adapters. I wanted to do a full review, and expected that I would be able to get some really good stuff. Snort. Instead I just got discouraged. It’s a good mount, don’t get me wrong, but I couldn’t get much out of my smartphone.

The piece facing you (flat-ish, with a clip on each side) is where your smartphone goes, also facing you. The two clips are spring-loaded so you pull them apart and put in your phone, bob’s your uncle. Except the clips could be a bit taller to account for the fact most people have cases on their phones, so it would have been good to go up a bit more before angling inward. It works better for me if I take the case off.

The two knobs shown in the picture below adjust the plate (i.e. where your smartphone is) right and left, and up and down (horizontal and vertical axis when you’re looking at the phone). This allows you to centre your camera eye at the back over your eyepiece. Most adapters have very rudimentary adjustments, more like a slide and then when it’s close, you tighten it in place. These two are more granular and let you go a little left, a little right, back a bit, okay now up, etc. Way easier than trying to get it into place on the old Meade adapter and then tightening everything in place only to discover I was actually off a bit and having to loosen it, readjust, retighten, etc. This you just turn the knobs slightly and you’re there. Hence one of the three reasons why I call it the Cadillac of adapters.

The next image isn’t a great angle. In the photo, you can see two adjustment knobs (not the orange dial with the Celestron logo on it but the orange knob next to it and the black knob sticking straight up). The black knob is reason #2 — it adjusts the height of the phone above the eyepiece. Many of the adapters don’t have this as an adjustment option, you just eyeball it or rest it against the phone, and that’s where you’re set. This allows you to go closer or a bit farther away to improve your focusing. I’ll get to the orange knob in a second, just remember it is there.

In this photo below, you can see the black knob and orange knobs much more clearly, while the horizontal and vertical axis knobs are hidden behind the plate in the image. In this photo though, there are three things to notice to get us to the third reason why it is the Cadillac of adapters.

First, we have the two pincers that look like a mechanical hand wrapping around the eyepiece. Lots of adapters have very little flexibility in how big of EPs they will take, most almost guaranteed to be limited to small diameter plossls. Not this baby. It opens up quite wide, and I can put my 17 mm Delos in it. These are fat EPs. The one in the image below is actually a 2″ EP. Most adapters won’t even come close to taking those. The trade-off to do that and the second benefit is that the orange dial acts as a hinge, with the little lever out to the right. Push on the lever, the fingers open, and you can swap EPs quickly. While that is a plus, it is also a danger — what if it comes loose when you don’t want it to? Well, that is what the third benefit — the orange knob — is for. You can use it to lock the lever in place i.e., lock the fingers in place so they won’t open. Making sure the EP is a firm fit. Plus, if you go back to that height option (the black knob), you can have the EP stick up as high in the fingers as you need to go to get a firm grip. 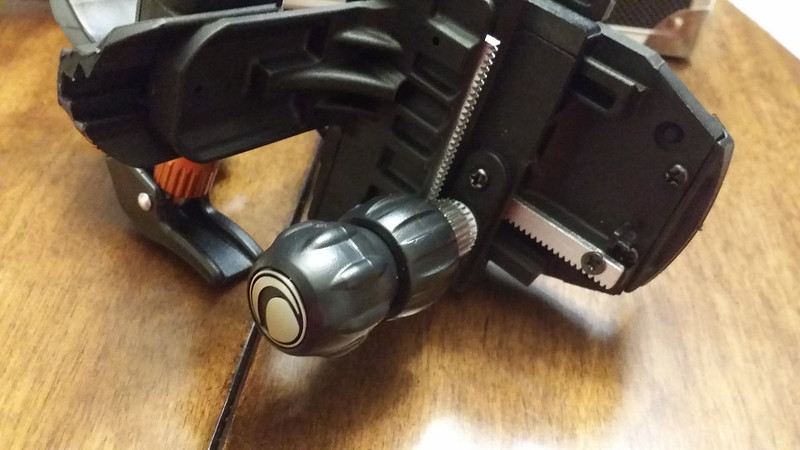 Combining it with my old Samsung phone

Alas, my smartphone wasn’t quite up to the same tasks, sensor- and software-wise. Jupiter wasn’t very hard to get close to, but focusing was a challenge with what I was using for software.

I couldn’t even get a good lock on the moon with my phone and the adapter. Some of that was just trial and error, some of it was just the limits of the setup. I tried for some stars, nothing took. And when I upped the ante again to try for something like a bright globular cluster, my old Samsung phone couldn’t even tell there was ANYTHING there to even take a picture of. It would try, and then come back and tell me, “Nothing there”, i.e., it couldn’t find a light source bright enough for the sensor to register anything but blackness. Sigh.

The only real thing I had going for me was something I found online. I hate the focusing knob on the NexStar 8SE. I have frequently felt like the knob was just too large of adjustments. One nudge left and you’re past focus, one nudge right and you’re past focus again. It almost felt like every time I was trying to focus, I needed a “half” focus option. There are digital focusers you can buy for hundreds of dollars, but that seems like overkill. Instead, I saw that someone online had 3D printed a simple larger knob that fits over top of the existing knob. The guy sent me the file, I found a local place to 3D print it, cost me $20. It looks like this: 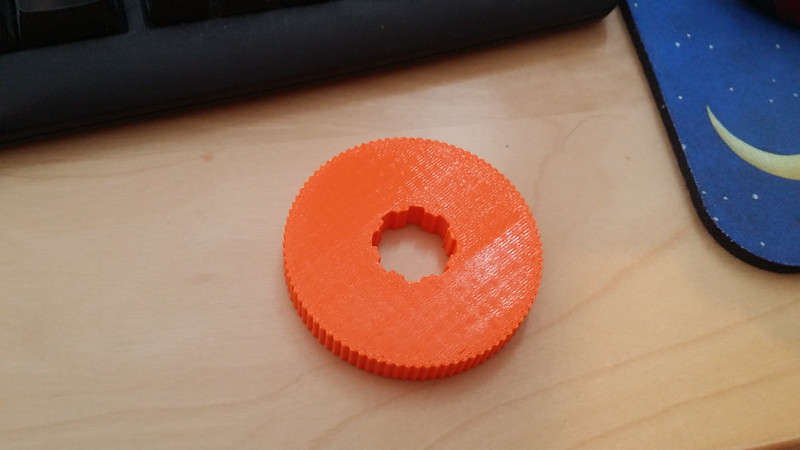 The focus knob on my OTA sits in the little hole and now I can do much finer adjustments. Sweet.

Fast-forward to New Year’s, my wife and I got new smartphones, and I went for — wait for it — an iPhone with all the bells and whistles that work well for prime AP. Also sweet.

Hopefully, all of this will give me a better start this year.