In my role as the RASC Ottawa Public Star Party Coordinator for 2017 and 2018, I sent out client feedback surveys to members and this year to the public too. For this year’s survey, looking at events held in 2018, I received 46 responses, a slight uptick from the 40 received last year. This year’s survey was sent to email distribution lists for RASC Ottawa members, OAFs, and OAOG, as well as posted on Facebook, Twitter, and the Ottawa Meetup pages where the events are advertised. These are the results.

Q1. Attendees to our public events often come from many groups. Which categories apply to you? 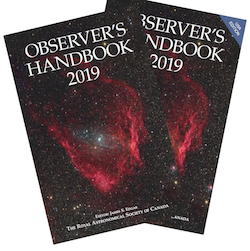 This is the annual observer’s guide published by the Royal Astronomical Society of Canada.

Each year, the Observer’s Guide is produced and sold to amateur and professional astronomers across North America, and those astronomers vary considerably in their capacity and interests. It’s hard to serve any “one group”, but as I am at the intro stage to the hobby, I’ll review from that perspective. Some highlights include:

Of course, it also has the key reference materials:

Saturday April 21 was International Astronomy Day, and while I held out a bit of hope I would make it to one of the daytime / solar star parties in Gloucester, I didn’t actually get going until after supper, just in time to head to the Canadian Aviation and Space Museum where RASC Ottawa was hosting a night-time star party. Not quite the big setup of our monthly summer parties in Carp, but still a decent number of people. In addition, my friend Rennie was going with his family to get used to setting up his scope. He has the same scope as mine, and we’re hoping he can jumpstart his learning and success curve a bit by piggy-backing off my now working alignment process.

As the first time of the season, I have to admit, I was pretty slow setting up. It was like I’d forgotten how ANYTHING attached to ANYTHING else.  » Read the rest

I joined the Royal Astronomical Society of Canada – Ottawa Centre a little over 5 years ago. I had a telescope when I was a kid, one of the cheap handheld ones, and predictably, I saw almost nothing with it. Fast-forward 30 years, and I bought a Celestron NexStar 8SE telescope with some inheritance money. During those five years, I had no end of alignment challenges that I couldn’t quite figure out, so my enthusiasm for all things astronomical, including Ottawa Centre, waxed and waned like the moon — when things went well, it was great! When things didn’t go well, I felt like an idiot.

As the RASC Star Party Coordinator for the Ottawa Centre, I asked members for information on two surveys for our approach in 2018. I don’t intend to be a simple slave to the survey (Mike M warned me that way could lead to madness!), but I did want some input on various elements to help guide my thinking. This post is designed to give some of the results of the survey. I divided the survey into two separate surveys on Survey Monkey, one about the overall approach and one about the actual dates. The response rate wasn’t astronomical (no pun intended), with about 40 people having views on the approach but only 20 having views on the dates.

The Survey about the Approach

Q1: The first question was a simple one — for our monthly star parties, did they want to only have them at Carp (15%), hold the main ones at Carp but have some extra ones elsewhere (53%), or mostly Carp but move them around (32%)?  » Read the rest