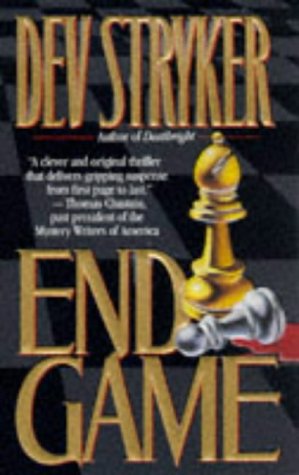 A body is found with the letter “P” carved into its forehead. P stands for pawn, and it is dumped in upper Manhattan, using the streets as a chessboard. The Knight and Bishop follow. And the chess-game begins. Inspector Regal has been chosen by the killer to play the game, which he does through moves placed in the New York Times. As long as the game is interesting, no more bodies. But Regal is not a very good chess player, the game becomes dull for the killer, and another body appears. But Regal has an ace in the hole: a retired master player named Billy Abbott who left the chess world behind and disappeared before it took over his life. Abbott tells Regal the moves to make the game interesting, and for awhile, he does — even turning the game around and winning. But having Regal win the game is not the object of the killer who targets Regal personally. A series of sub-plots involve a cop working for Regal who had been killed during the line of duty while hunting down Panamanian drug runners, and a female cop who loved him and wants justice; a political side with Regal butting heads with his departmental rival who is in charge of both investigations; and a personal side, with Regal suspecting his wife of having an affair with a power mogul. This is the second “Dev Strkyer” novel, a nom-de-plume for Warren Murphy and Molly Cochrane.

I love Murphy and Cochrane’s work, and this one is no exception. Well-written, the chess strategies are well-mixed, and the story moves along fast enough with a lot of sub-plots mixed in to keep life interesting when the bodies are on hold. Even the political manouevering is interesting. The ending, although pat, is not a typical “everybody lives happily ever after” finish.

The climax is *too* pat, and too action-oriented rather than detection-based. I knew who the killer was long before they were revealed, and I’m not even sure why the authors chose to reveal the killer when they did, other than the realization perhaps that the reader already knows by then so the mystery is really gone. The only question was when and where they were going to be caught, if at all. As well, Stryker doesn’t really play fair with the reader at the start in terms of the depiction of the killer, but I still figured it out before the end despite the intentional misdirection.